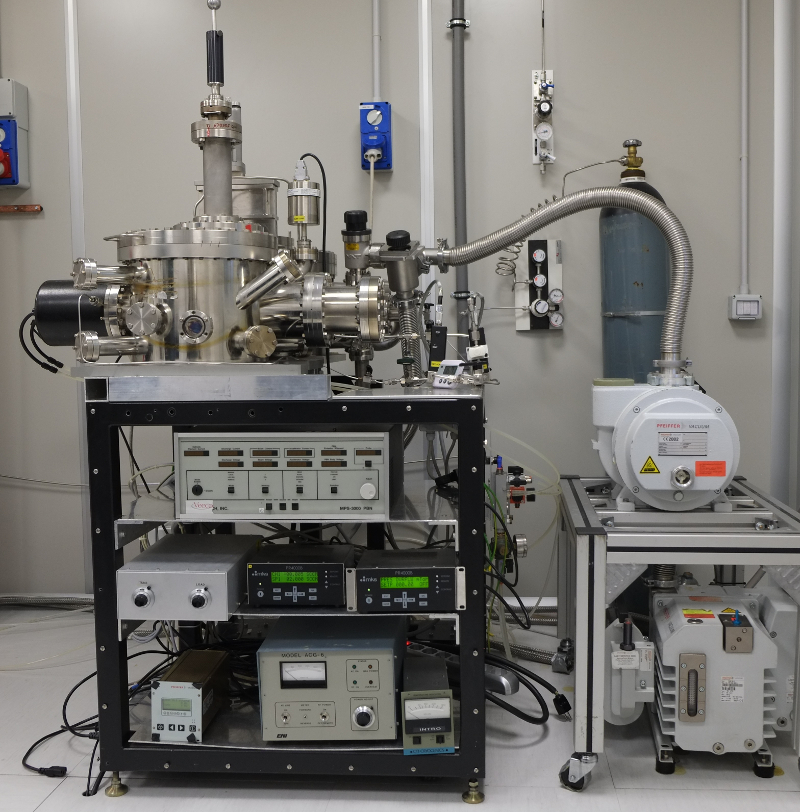 Ion mill system to define structures through a photoresist or hard mask on 1” substrates. Two independent fluximeters allows the operation with a beam neutralizer. The rotating sample holder can be tilted up to 60°. The system is also equipped with an ion source (3”) for reactive magnetron sputtering (Ar and N2).

Ion Beam Etching is a physical dry etching technique where Ar+ ions are accelerated towards the sample in a vacuum chamber. Not dissimilarly to what happens with sputtering targets, the sample material is removed by energy transfer between the accelerated Ar atoms and the sample surface. Ar+ ions are generated from inert Ar gas through a discharge current. Here, a filament run by current, which is the cathode, emits electrons by thermoionic effect. These electrons, accelerated towards the anode by the tension applied between the electrodes (discharge voltage), hit and ionize the Ar atoms giving rise to Ar+ ions and free electrons. These free electrons, which are also accelerated by the potential difference, contribute to maintain the plasma. Some of the Ar+ ions are then accelerated toward the sample by a grid set at a negative potential (accelerator voltage). Thanks to the decoupling between the electrodes which generate the plasma and those which accelerate the plasma to the sample, it is possible to control independently the flux of Ar ions (increasing or decreasing ionization through the discharge voltage) and the energy of the accelerated ions (through the accelerator voltage of the grid). Between grid and sample, a second filament produces electrons by ionizing Ar atoms (Plasma Bridge Neutralizer). These electrons avoid the positive charge build-up on the sample both neutralizing the Ar+ ions of the beam before they reach the sample and directly compensating the positive charges on the sample surface. The Ar flux in the discharge chamber and the one for the neutralizer are independently controlled by two different fluximeters.