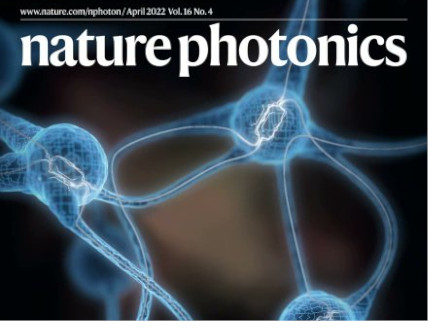 Polifab has recently been mentioned in a Nature Photonics paper on a quantum-optical memristor partly fabricated at our facility, which has been also chosen for the cover of the April issue.
A team of physicists led by Roberto Osellame of Cnr-Ifn and Philip Walther of University of Vienna, in collaboration with Andrea Crespi of Politecnico di Milano, has deveoloped this novel device capable of obtaining the same functional characteristics of an electronic memristor operating on quantum states of light.
The core of the device is made of dynamically reconfigurable optical circuits fabricated by laser pulses on a glass chip, that allow the enconding and transmission of quantum information while retaining a memory of the previously processed states, behaving like a quantum artificial neuron.
A simulation of an entire network of quantum memristors was also performed, demonstrating that such a device can be used in quantum neuromorphic architectures and could bridge the current gaps in the field of quantum artificial intelligence.