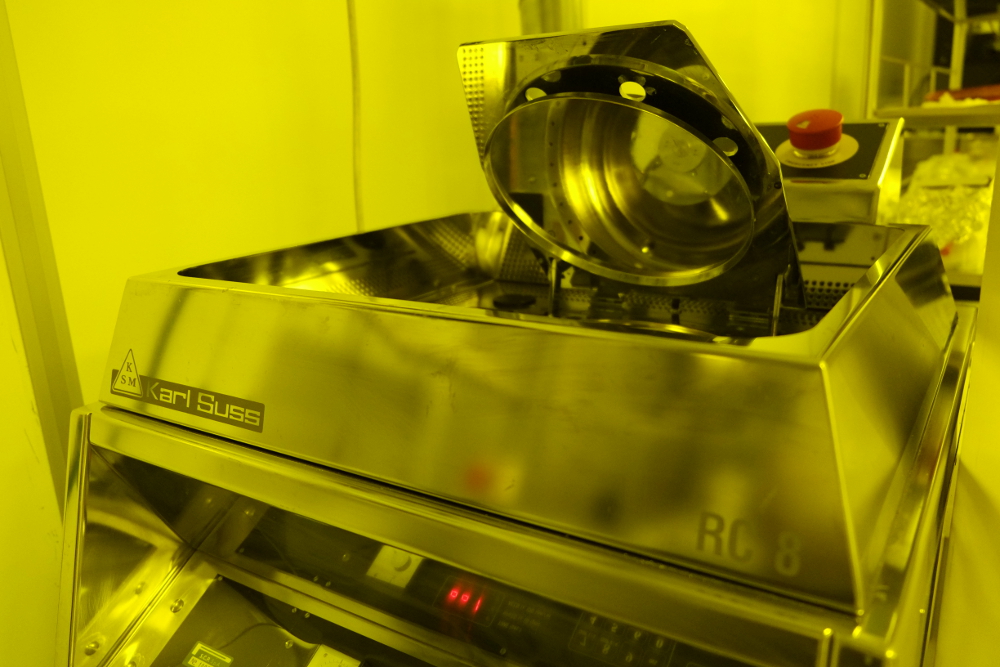 The RC8 is the ideal platform for manual and semi-automated spin coating processes in R&D and low-volume fabrication. Substrates up to 6 inches in diameter and square substrates of small dimensions can be processed. The SUSS RC8 is a modular system designed to be adapted to wide range of applications within the resist coating regime. The Gyrset system are composed of eight elements including the GYRSET system, the protective cover, the collecting bowl, the resin collector, the vacuum chamber, the spinner motor, vapor exhaust and the deflector. These elements created a static solvent saturated atmosphere where the air turbulence is drastically reduced creating an optimal atmosphere for coating performance which include the reduction of particulates. Low turbulence and solvent saturated atmosphere lead to: reduced chemical consumption (e.g. BCB), no backside contamination, low surface roughness (also for thick resists) and improved planarization.

The spin coating has been used for several decades for the application of thin films. A typical process involves depositing a small puddle of a fluid resin onto the center of a substrate and then spinning the substrate at high speed (typically around 3000 rpm). Centripetal acceleration will cause the resin to spread to, and eventually off, the edge of the substrate leaving a thin film of resin on the surface. Final film thickness and other properties will depend on the nature of the resin (viscosity, drying rate, percent solids, surface tension, etc.) and the parameters chosen for the spin process. Factors such as final rotational speed, acceleration, and fume exhaust contribute to how the properties of coated films are defined. One of the most important factors in spin coating is repeatability. Subtle variations in the parameters that define the spin process can result in drastic variations in the coated film.